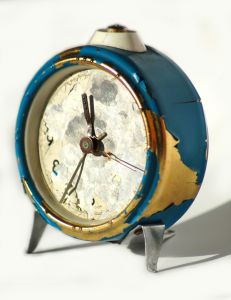 Last week, I had a royal rant against my trash company. It happened shortly after I noticed a big, orange ACCOUNT HOLD sticker on one of my curb side bags – the bags they didn’t pick up.

Fortunately for the customer service rep who took my call, the worst of my rant was over. Unfortunately for the house guests staying with me (it’s ok, it was family), I laid it on them. They were closest in proximity when I was told over the phone that it was due to a $10 mistake on my bill. Ten dollars. For a service I pay three months in advance.

Livid doesn’t begin to describe my emotional state that day, and though I was polite, I minced few words in venting my frustration. Still, it was better than if my initial anger had played out first with the rep on the phone.

Not so many years ago, I would have never done anything like this – the rant that is. Something about all this life experience, I guess.

It’s a struggle to find the happy medium. I fear damaging my witness if I’m straightforward and firm, but I’m not going back to my days of being pushover.. Though there are plenty of times I’ve spoken out of immediate anger – resulting in regret – there are also times I kept silent when I should have spoken up.

Recently, someone pointed out to me that it’s not wrong to be angry (Ephesians 4:26). God simply commands that, in our anger, we don’t sin. There are certainly numerous occasions HE has been slow to anger with his children (Numbers 14:18,  Nehemiah 9:17, Psalm 86:15, and more – mostly from my own life).

For me, being slow means taking a few minutes to vent to the wall, pray, do whatever I need so I can speak out in a controlled manner – hopefully with wisdom. It’s a good practice, whether the issue is big, or relatively small. (Yes, the trash deal falls into the “small” category. But after driving my garbage bag-filled car to the company headquarters for dumping, it didn’t seem so at the time).

At any rate, I’m not sure what God does with his first five minutes, but thankfully it isn’t directed toward me.